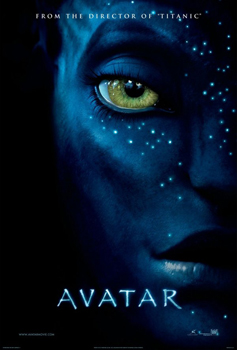 Elaborate visual effects are used to convey a mediocre story. Every single plot turn is predictable, and helmer/scripter James Cameron certainly did not need 162 minutes to tell his tale. Yet, parts of it are exciting, and even moving.

The year is 2154 and marine Jake Sully (Sam Worthington), severely wounded in combat and unable to walk, has come to the planet Pandora (original name, don’t you think?) to take over his deceased twin brother’s spot in the Avatar program.

Pandora has a valuable mineral—unobtanium—(chalk up another ridiculous cliché for Cameron), and is also the home to the Na’vi, 9-foot tall blue humanoids, who don’t especially want to abandon their dwellings, so that the evil company from Earth can strip mine the landscape. The company, led on Pandora by Parker Selfridge (Giovanni Ribisi) has tried everything: bribes, medicine, technology transfer, but these have not worked.

The Avatar program, under the direction of Dr. Grace Augustine (Sigourney Weaver), combines human and Na’vi DNA, and the avatars are deployed in the field, controlled by humans in a sort of dream state, while within a pod. Supposedly, the avatars will blend in with the Na’vi, and gain their trust. Humans cannot operate on their own on Pandora, since breathing the atmosphere is instantly fatal. As they say on “Mystery Science 3000,” don’t worry too much about the science here.

Jake takes to his new assignment with great alacrity, especially since he can now walk—at least virtually. Before long, he hooks up with a Na’vi princess named Neytiri (Zoe Saldana), and her people agree to take him in, and train him in their ways. This does seem strange, in that the Na’vi are aware of how the avatars work, calling them “dream walkers.”

Many of the Na’vi have also learned English, and can communicate with Jake, as he tries to become one of them. They are a close to nature group, and a key ritual has them bond with a sort of dragon creature, who maintains loyalty only to a single individual, for life. Jake soon becomes expert in flying around on this creature.

Bearing in mind that the Avatar program has gone on for six years, with little to show for it, the company is getting impatient, and is considering the military solution recommended by chief of security Colonel Miles Quaritch (Stephen Lang). Quaritch is an over-the-top version of Colonel Blimp, and is itching for a battle with the Na’vi, which, of course, will come—in full 3-D.

Much of the film is devoted to exploring the ways of the Na’vi, including the method whereby they can hook their tails into natural objects, and commune with the Eywa—their nature god, as well as the spirit of whatever creature or plant they are connected to. The Na’vi will say “I see you,” meaning that they can see into the other’s soul. Some viewers might think of all this as an update and expansion of Star Wars’ “the force.” Other viewers might regard the Na’vi as a blue-tinged version of our own American Indians.

Many commentators are linking the story line to protests on the Iraq War, crass commercialism, and the good old “noble savage” conceit. But, how bad can commercialism be, if Cameron can get these same corporate interests to finance his film to the tune of upwards of $400 million?

Not surprisingly, most of the critics were fooled into giving this pic raves, apparently not realizing that a crummy story extravagantly told is still a crummy story. And, it is clear that Cameron’s ear for dialog hasn’t improved one bit since Titanic (1997). A few lines actually got bad laughs (unintended) when I saw the flick. Perhaps the movie’s worst element is that there is zero chemistry between Jake and Neytiri.

Enjoy Avatar as visual candy. You’ll be disappointed if you expect much more. Frankly, I thought that Cameron would have done better, given the 12 years since Titanic.

« THE OTHER (1972) RETROSPECTIVE
THE DETROIT AIRPORT INCIDENT »