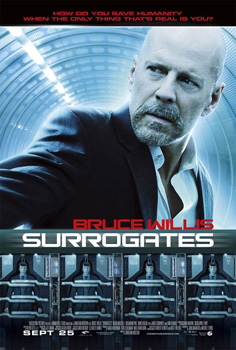 One more vision of a dysotpian future, but presented as if the setting could be today. Foolishly marketed as an action pic, and then mostly hidden from critics, the movie garnered a PG-13 rating to bring in the teens, but do the teens care about any of its stars?

As the opening credits roll, we are introduced to the concept of surrogates (or “surries”), robotic devices that let an owner stay at home in his stim-chair, while his idealized cyber version of himself interacts with the world. As it happens, most of the world’s population now uses these machines (no explanation how this could happen in countries too poor to feed themselves), so this is really a big deal.

Crime is down 99%, and life is great. What could possibly go wrong, even if there are some folks who aren’t particularly enamored of the concept?

Well, for starters, the unthinkable happens. An attack on a surrogate somehow causes the death of its owner. This is supposed to be impossible, given that numerous surries have been destroyed in the field, with no injury to the owner.

Called in to investigate are FBI agent Tom Greer (Bruce Willis) and his partner Jennifer Peters (Radha Mitchell). With some high-tech help, Greer figures out that the assassin is Miles Strickland (Jack Noseworthy), a non surrogate user, and resident of a nearby segregated community set up for these outcasts.

Greer (via his surrie) pursues Strickland into this community—against specific government policy, but his surrogate is destroyed (although not with the magic weapon that would kill him), and he watches as his backup team is killed in this manner. Strangely, his superior is not overly concerned about all of this.

Meanwhile, Greer is becoming disaffected with this virtual way of life, while his wife Maggie (Rosamund Pike) is getting more and more addicted to it, and refuses to interact with him as her real self. Indeed, she says that her surrie IS her real self.

At that, and with his surrogate destroyed anyway, Greer opts to continue the investigation as his human self, and will soon run afoul of rejectionist leader The Prophet (Ving Rhames), a military tie-in, and the elusive Dr. Lionel Canter (James Cromwell), inventor of the surrogate process.

Given its trim 88 minute running time, numerous matters of daily life are left out, such as how human reproduction occurs, and what kind of services can safely be contracted out to surrogates. Shouldn’t an airline pilot or physician actually be on site while he is working, for example? These sorts of questions cast a pall over the film’s ending.

Based on a graphic novel that is in some ways darker than this movie, Surrogates simply extends our current virtual ID phenomenon, and the legion of couch potatoes. No doubt, many of us are living far too vicariously now, even if we still have to venture out into the world.

Ironically, so-called “reality” shows are anything but, and truth—without a spin—is pretty hard to come by these days. Perhaps, we are already living in the sort of dystopian world featured in much science fiction. Will Surrogates be a wake-up call?