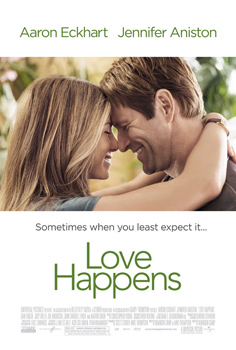 There are elements of a good story here, but the plot takes too many obvious turns, opting for clichés every time. Most viewers will be less than pleased with this pic, and one of the big reasons is that it is marketed as a romantic comedy, even though it is hardly romantic, and it is certainly not much of a comedy. Grotesque product placement mars the proceedings, which alone could account for the near universal negative critical reaction.

Burke Ryan (Aaron Eckhart) is a successful self-help guru, who got to where he is by writing a book on how he overcame the grief in losing his wife. In Seattle for a one-week (!) seminar—delivered to adoring fans who also want to get over their grief—Burke is soon revealed to be hiding some nasty secrets. For one thing, he is not the teetotaler he claims to be (as we are treated to numerous shots of Grey Goose vodka bottles). For another, and way more importantly, he HASN’T gotten over his grief one little bit.

Walking through his hotel, he literally bumps into Eloise (Jennifer Aniston), a quirky florist with her own shop, who comes in to tidy up the hotel’s floral arrangements. As he pursues her a bit later that day, she blows him off in a manner far too cruel for its context. Never fear though, since Eloise soon gets her comeuppance as she discovers that her current boyfriend is cheating on her.

Thus, the character profiles are clearly drawn: A self-help hypocrite and a woman who keeps getting into bad relationships. (Maybe Jen Aniston is most comfortable playing her real-life self onscreen.)

The movie spends a whole lot of time—as it should—developing Burke’s character, and maybe five minutes on Eloise’s. This is but one of the deficiencies in the screenplay. Another would be how pivotal character Walter (John Carroll Lynch)—who lost his son in a tragic accident, totally beyond his control—is fleshed out. Writer (and director) Brandon Camp would have us believe the this former contractor, who stopped doing construction because the accident occurred on a jobsite, would drive all the way to Seattle from Montana, only to try to get out of attending the seminar once he has arrived.

Goofy scenes thrown in to mostly extend the film’s running time include a bizarre sequence involving freeing a pet bird, and the therapy group’s trek through Seattle, with a stop at the graves of Bruce Lee and his son. Story logic lapses include the fact that big media companies, eager to sign Burke, would happen to come to Seattle to make their pitch and why overcoming grief would be such a hot property to begin with.

Shouldn’t he be occupied with his seminar, and wouldn’t that preclude business negotiations? Inasmuch as mankind has been dealing with grief since the dawn of time, and the usual self-help juggernauts promise economic success rather than peace of mind, the viability of this franchise is questionable.

Finally, Eloise’s motivation in helping Burke with his problems is difficult to understand. If she loves him, she does a great job of hiding it. More problems with the script.

But, what do you expect from such a lazy title as “Love Happens,” which would barely pass muster as a working title, for heaven’s sake? My condolences to the actors.

« BEHIND THE SCENES IN HEALTH CARE
SURROGATES »