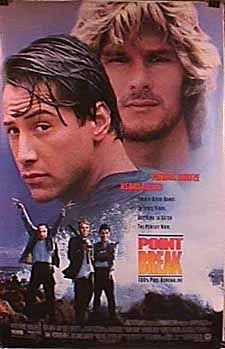 What do you get when you combine breathtaking action sequences with dialog noted for both its cool and stupid lines, throw in a few police procedural clichés, and new-agey sentiments played against a classic SoCal backdrop? You get Kathryn Bigelow’s Point Break, a cinematic study of surfing culture gone bad, which can also serve as a metaphor for the drastic fall of the once Golden State.

“You know less than nothing. If you even knew that you knew nothing, at least that would be something, but you don’t.”

Utah teams up with veteran agent Angelo Pappas (Gary Busey) to work the case of the ex-presidents, a very successful crew of bank robbers, so-named because they wear masks of Reagan, LBJ, Nixon, and Carter while pulling their heists. Pappas’ theory—mocked by his colleagues—is that the ex-presidents are surfers.

As such, Utah, who has only recently even seen the ocean, must get into the surfing culture. He starts off by purchasing a pig-board (an old fashioned style with a narrow nose and wide tail), and embarks into heavy surf. This proves almost fatal, but gains him an introduction to Tyler (Lori Petty) an expert surfer who rescues him, and eventually agrees to train him.

Johnny takes to the sport quickly, becomes infatuated with Tyler, and meets her former lover Bodhi (Patrick Swayze), a charismatic beach figure with quite a following. Bodhi, they say, is short for “Bodhisattva,” someone who is motivated by compassion and seeks enlightenment not only for himself, but also for everyone else.

Bodhi recognizes Johnny as the Rose Bowl hero of a few years back, and invites him into his inner circle, that consists mostly of surf bums and hangers-on, who don’t seem to hold a candle to Bodhi’s physical or mental attributes. Clearly, Johnny brings new quality into the group.

Meanwhile, the Bureau has found a hair sample from the ex-presidents, and Johnny figures that if they analyze the strand, and compare it to the chemical content off various beaches by way of hair samples taken from subjects on the shore, they can close in on the likely surfing spot (break) of the bank robbers. His idea pays off as Latigo Beach in Malibu is identified as the spot.

As Utah surfs at Latigo, he runs into some tough locals, who jump him. Bodhi forces the locals to back off, but Johnny starts the fight all over again, and he and Bodhi kick some serious butt before leaving. This, naturally, bonds the two. Based on this encounter, and on further information given him by Bodhi, Johnny is convinced that this group of thugs are the ex-presidents.

A raid is scheduled on their house, resulting in the finding that while the group are drug dealers, they cannot be the bank robbers. Unfortunately, a separate investigation was underway on these guys that is now ruined, even if the furious gun battle that took place will assure long jail sentences for all involved.

As Utah gets more involved with Bodhi, he determines that Bodhi is actually the leader of the ex-presidents. He figures out where the next bank robbery will be, and he and Pappas stake it out. This leads to a incredible foot chase, shot with handheld cameras, as Johnny pursues Reagan/Bodhi, but can’t bring himself to shoot him—and Bodhi gets away.

The mind games now begin. Bodhi’s gang is nervous, since their perfect streak of many bank robberies was already tarnished, and now an FBI agent—supposedly their friend—knows who they are and where they live. Acting as if everything is cool, Bodhi picks up Johnny for some skydiving, but once back on the ground shows him a video in which Tyler is being held hostage, and will be killed if Johnny prevents the gang from pulling one more job.

Forced to comply, Johnny joins them in the robbery, which goes horribly bad, leading to another skydiving sequence, where Utah jumps off the plane with no chute, and catches up with Bodhi, who does release Tyler.

The scene shifts to Bells Beach, Australia, where the dogged FBI agent finds Bodhi, waiting for the ultimate wave as a 50-year storm is coming in. Although his capture is pre-arranged with local authorities, Johnny lets him surf the gigantic wave, which will surely kill him.

Beyond the frenetic action, there are some interesting themes here. Bodhi reassures his cohorts:

“What’s the matter with you guys? This was never about the money, this was about us against the system. That system that kills the human spirit. We stand for something. We are here to show those guys that are inching their way on the freeways in their metal coffins that the human spirit is still alive. Don’t worry about this guy, okay? I know exactly what to do with him.”

But in reality, Bodhi is little more than a parasite, surrounded by sycophantic disciples. He may claim it’s not about the money, but what else could it be about? Money is the only way he could become the Lord of Malibu, as the “guys that are inching their way on the freeways in their metal coffins” pay the freight. Besides, we don’t exactly see him being too worried about the enlightenment of others, despite the “Bodhisattva” moniker.

Johnny, on the other hand, is probably even more of an adrenaline junkie than Bodhi, but has taken a more constructive path. Once these two characters collide, it is inevitable that the string of perfect, clean, violence-free bank robberies will end. Indeed, as Johnny is on the getaway plane with Bodhi and the seriously wounded accomplice Roach (James LeGros), Utah tells him: “You’re cold because all of the blood is running out of your body, Roach. You’re gonna be dead soon. I hope it was worth it.”

Of course, it wasn’t worth it, anymore than was Bodhi’s death on a big wave. Bodhi, with all his gifts, ends up causing the deaths of his disciples, as the fantasy world times out.

This is all faux enlightenment, and what better place for it to play out than LA? The writers could not have known how apt an analogy their surf guru Bodhi was for the downward spiral of California.

« STATE OF PLAY
HARDING: THE PRESIDENT WHO UNDERSTOOD HOW TO FIGHT AN ECONOMIC DEPRESSION »