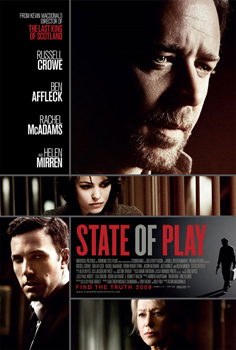 Helmer Kevin Macdonald compresses the 2003 BBC six hour mini-series into just over two hours, and moves the action to Washington, DC. What we get is a good old fashioned journo as hero, breaking the big case of political and corporate corruption—with nary a dull moment. The plot weaves its way to an unexpected twist ending, with mostly good perfs throughout.

As the film begins, a purse-snatcher is plying his trade, and makes what seems to be a successful getaway, only to be shot by an unknown assassin. This is observed by an unfortunate guy on a bicycle, who is likewise dispatched. Not long after these shootings, Congressional aide Sonia Baker (Maria Thayer) dies in a suspicious metro accident.

Sonia worked for rising star congressman Stephen Collins (Ben Affleck), who soon admits to having an affair with her. Meanwhile, all these developments are being covered by veteran reporter Cal McAffrey (Russell Crowe), coincidentally a freind of Collins, who had a short affair with his wife Anne (Robin Wright Penn).

McAffrey teams up with his paper’s political blogger Della Frye (Rachel McAdams) and they soon uncover connections between the shootings, Sonia’s mysterious death, and a Blackwater-like defense contractor called Pointcorp. It seems clear that Pointcorp is pulling some strings to take the heat off them from a current congressional investigation, in which Collins is playing a big part.

Cal and Della want to dig into the story, but editor Cameron Lynne (Helen Mirren) is trying to save the struggling paper, now owned by Media Corp. (based on News Corp.), and wonders why they just didn’t exploit the sex scandal aspect of it for an easy scoop. Eventually, the pair get Cameron to agree to give them a bit more time to put the larger story together.

Of course, our assassin from the beginning of the pic is still busy, and one of his targets is caught up in a cool riff on the old “trying to kill the heavily-guarded hospital patient” routine. Even Cal himself is a target, and narrowly misses getting bumped off after he figures out where the assassin lives.

Things are not necessarily what they seem as the story plays out, and it takes an interesting turn when PR flack Dominic Foy (Jason Bateman) comes along late in the second act. His ties to Pointcorp are key to unraveling all the mysteries.

While the film is attacking entities usually identified with the conservative side of things (News Corp. and Blackwater—now known as Xe Services, LLC), its congressional baddies are of the Democratic persuasion. Oddly, the movie seems to portray the rather quaint notion that print journalism is better suited to investigative work than bloggers, even though exactly the opposite has been true—with few exceptions—for at least the past five years.

Perhaps, the most accurate thing in the pic is the low repute in which it holds members of Congress. These days, few would disagree with that notion.