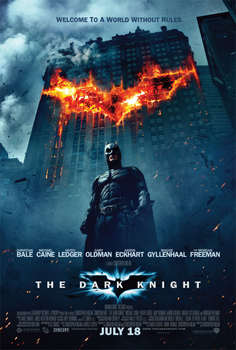 Ultra-dark in tone, loaded with violence, and burdened with a bit too much plot, this pic moves well beyond what you might expect from the typical superhero action flick.

The film opens with a bank heist, directed by the Joker (Heath Ledger), made all the more brazen in that it is a mob-owned bank, and the Joker kills all of his accomplices. This is just the latest blow against against organized crime, though, as the trio of Batman (Christian Bale), Lt. Gordon (Gary Oldman), and new district attorney Harvey Dent (Aaron Eckhart) seems to be having some success in ridding Gotham City of crime.

Dent is proclaimed as a white knight, who’s not afraid to fight crime, and he has also impressed Batman’s former girlfriend Rachel Dawes (Maggie Gyllenhaal) enough that she is now Dent’s girlfriend. Meanwhile, the Joker offers to kill Batman, and after demonstrating his utter ruthlessness—not to mention psychotic behavior—the mob agrees to his ridiculously high fee.

Although his first attempts to kill Batman and Dent both fail, the Joker comes up with the stratagem of killing one citizen of Gotham City every day until Batman reveals his secret identity. In a surprise move, Dent says he is Batman, and since the Caped Crusader is technically a fugitive vigilante, he turns himself in. Naturally, the crime wave does not stop, and in a spectacular sequence, the Joker is finally caught.

Of course, he escapes, via a double ruse, and a sort of homage to the jailhouse escape of Hannibal Lecter. Now, the story really gets into high gear, with a goodly number of twists and turns before all is resolved. In keeping with the film’s dark tone, the resolution and conclusion are by no means neat and tidy. The perfs are all first rate, with Ledger’s attracting the most attention, but he surely was helped along by the excellent script.

Serious and though-provoking matters are touched upon here. The Joker in this film is far more than a mere criminal or serial killer. He is a full-fledged urban terrorist, with no particular goal in mind, other than to create chaos. One theme of the pic is “rules,” and unlike the mob or law enforcement, he doesn’t have any. While his free form approach does thwart the good guys, at other times, rules of civilization hamper his designs.

Still, as Batman refuses to kill the Joker when he has the chance, you wonder if that wouldn’t have been the more prudent thing to do. Indeed, the trade of Samir Kuntar, who murdered a four-year-old Israeli girl and her father 29 years ago, for some body parts of two dead Israeli soldiers makes a pretty good argument for a take no prisoners stance.

It’s no spoiler to mention that Dent suffers terribly, and undergoes a transformation. The audience is put right at the dividing line (and it’s not a clear one) between justice and simple revenge. Another controversy introduced is the notion of how much high-tech surveillance is too much, even if it is only being used to foil a potentially catastrophic event.

For me, though, it is rather apparent that eliminating the bad guys early on would also eliminate any concerns over follow-up measures. How justice is served by maintaining effete postures of us being “above” certain acts in the face of outrageous terrorism continues to be a mystery to me. After all, for things that really do matter to the government—such as non-payment of taxes or violation of gun laws (Randy Weaver)—their bellicosity in pursuing alleged wrongdoers would make the Joker blush.

« ARE THERE ANY LESSONS FOR US IN WALL-E?
CURRENT AFFAIRS »