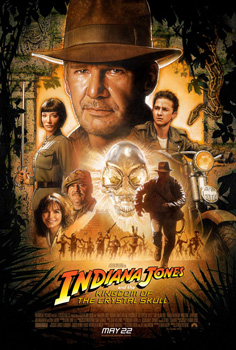 Some good action sequences, but far too much reliance on computer effects, along with a poor script and some uninspired performances make the fourth iteration of the Indy saga a mixed experience.

The pic begins as the Paramount Studios trademark mountain morphs into a CGI molehill, alongside a road filled with military vehicles heading for a secret Nevada facility. The year is 1957, meaning we are picking up where the last episode of the franchise —Indiana Jones and the Last Crusade (1989)—left off, adding the actual number of years in reality.

It soon becomes clear that there is something quite wrong with this convoy, as it is filled with Russians, who break into the facility, heading straight for Area 51 (of course). Upon arriving, they let Indiana Jones (Harrison Ford) out of a car trunk, accompanied by fellow prisoner (or maybe not) ‘Mac’ George McHale (Ray Winstone). The Ruskies, under the direction of Irina Spalko (Cate Blanchett–miscast, with a Russian accent that changes even within single sentences) are looking for an artifact, that Jones can supposedly lead them to.

Via rather improbable circumstances, Jones escapes, only to find himself in the middle of a nuclear test site. How he survives that little problem strains credibility even more. But, soon he is back at his teaching gig and gets caught up in a ham-handed reference to the so-called “Red scare” of the 1950s, and temporarily loses his job—albeit with full pay.

Unfortunately, Hollywood’s constant propagandizing notwithstanding, there was plenty of reason to be worried about the Commies in that era, and not only because they were able to steal atomic secrets with the greatest of ease.

Now with little to do, Indy is informed of the perils of his former colleague Professor ‘Ox’ Oxley (John Hurt), who is being held somewhere in Peru. The messenger with this information is a cocky kid who calls himself Mutt (Shia LaBeouf). Mutt tells Jones that the same baddies are also holding his mother, soon to be revealed as Marion Ravenwood (Karen Allen). It’s no spoiler to mention here that Mutt is their son.

Father and son travel down to Peru, but then so do the Russians. Numerous adventures occur, but even the ones that promote some interest seem to go on for too long. And yes, there really are space aliens in this movie, but thankfully they don’t do very much. Since there were several drafts of a script prior to the one that made it to the screen, you have to wonder what the others were like, and why Spielberg rejected them.

And what about no attention to detail? If Blanchett’s horrific Russian accent represents the sum total of many retakes, who was watching the dailies? Beyond that, the part was a very poor man’s version of James Bond foil Rosa Klebb, in From Russia with Love (1963). Perhaps the most amazing goof occurs when an LED digital countdown timer appears in what is supposed to be 1957. This is at least 15 years ahead of its time, and is sadly indicative of the level of care in most aspects other than photography throughout the film.

Village Voice critic Robert Wilonsky pretty much nailed it: “Kingdom of the Crystal Skull” is as joyless as its predecessors were blissful.