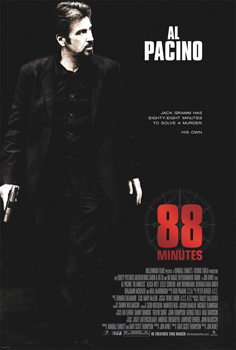 The critics are really piling on this crime melodrama (or “meller” as Variety would put it). While the pic is not very good, it almost works as a quick popcorn movie.

Dr. Jack Gramm (Al Pacino) is a big-time forensic psychiatrist, and adjunct professor, who specializes in serial killers. One of Jack’s high profile cases was the “Seattle Slayer,” a thrill-killer who was put on death row, largely because of his testimony. Now, with the Slayer’s execution imminent, things begin to happen. A pair of homicides with the Slayer’s exact M.O.—including certain details that were never released by the police—occur on the eve of the execution.

Gosh, does this mean that Jon Forster (Neal McDonough) aka the Slayer is really innocent, or does it just mean, as is suspected by Gramm, that a copycat is at work? If so, this copycat is getting plenty of help from Forster.

Compounding Gramm’s difficulties is a phone call telling him that he has only 88 minutes to live, and this is played out against a backdrop of Forster getting national TV time proclaiming his innocence, along with a goodly number of red herrings thrown into the mix. But, even mellers can have too much plot, and that would be bad enough, except in this movie the killer is revealed about 30 minutes in, to anyone who has previously watched whodunits. Worse than that, SPOILER WARNING: this character is played by the worst actor in the film—and that’s saying something.

As it happens, most of the action involves Gramm talking on a cell phone, or running around Seattle to follow-up leads. Clearly, the set-ups arranged by the killer to foil Jack would require supernatural timing, and they don’t have much point anyway, since the same climax could have occurred without all the elaborate machinations.

Still, Pacino manages to turn in a performance, and there IS a guilty pleasure in watching bad flicks.