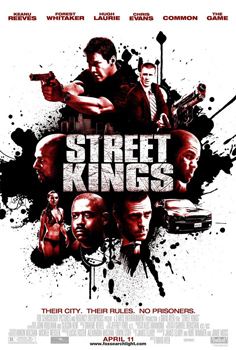 A jumped-up police procedural with hot action, and nearly flawless pace and editing. Kudos to the producers, who demonstrated that it IS possible to make a movie that won’t have you reaching for the fast forward button. Dissed by many critics, who claim that they have seen it all before, even though the twist ending really is something new, the guys—especially—will like this one.

Tom Ludlow (Keanu Reeves) belongs to an elite vice unit of the LAPD. The pic begins with Ludlow waking up, but we soon realize that it is sunset, not morning. This sequence builds into a furious gun battle, as Tom single-handedly kills all the perps in a kidnapping ring, and saves the exploited teenage girls in the process. No doubt, there would have been a more by-the-book way to accomplish the raid, but since all who were killed were scumbags and the girls were saved, who’s complaining?

Certainly not Tom’s boss Captain Jack Wander (Forest Whitaker), although Tom does get some serious negative vibes from his ex-partner Terrence Washington (Terry Crews), who left the unit, apparently disgusted with its penchant for meting out frontier justice. In fact, according to Wander, Washington has ratted out his unit to Capt. James Biggs of Internal Affairs (Hugh Laurie).

Wander warns Tom to keep far away from Washington, but he does just the opposite, following him into a liquor store, for some conversation, and probably some rough stuff. Instead, the two cops happen into an ultra-violent scene that is far more than a robbery. Two masked intruders shoot up the store, along with the proprietor and Washington.

Given the bad blood between them, as well as the presence of not two but three types of bullets inside Washington—and the highly unlikely scenario—Ludlow becomes the prime suspect. However, this changes in a flash, as the store’s video recording is lost, evidence is tampered with, and the shooters are identified a few days later—conveniently dead. As much as he hated Washington for turning on him, Tom realizes that the fix is in, and agrees to work together with Detective Paul Diskant (Chris Evans), assigned to work the case.

Their investigation takes them to some seedy places, and reveals a few pretty nasty characters, who may also be cops. As you might expect, the story plays out with extreme violence, delivering redemption—more or less—for Ludlow.

I suspect that many of the critics panning this flick are put off by the ethnic slurs, perhaps thinking that they can judge the mean streets from their PC environment, over lattes at Starbucks. Of course, there are also the attacks on Keanu Reeves, who, for some of them, will always be the laid-back part Hawaiian surfer dude cop of Point Break, or worse, the slacker of Bill & Ted’s Excellent Adventure (1989).

Maybe the worst self-congratulatory “thoughtfulness” on the part of the crits comes out with their ludicrous notion that Reeves’ performance is somehow patterned after Clint Eastwood’s Dirty Harry Callahan. But then, it probably IS destructive having to watch 300-500 movies per year…

« THE PROBLEM WITH NEO-CONS
88 MINUTES »