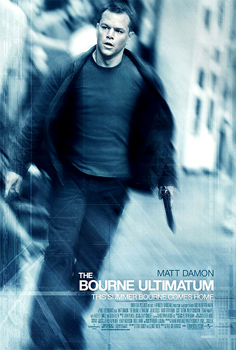 Nonstop, breathless action, handheld camera work and handheld-looking camera work combine with very little story and not much acting in this third installment of the Bourne saga. The virtually unanimous critical acclaim of this pic seems to be based on two things: The use of practical stunts rather than CGI, and its sophomoric portrayal of the eee-ville CIA as a thinly veiled attack on US foreign policy.

We start off with Jason Bourne (Matt Damon), fresh off his latest adventure in Moscow, where—in the previous installment—he was trying to discover what turned him into a CIA killing machine. He leaves Moscow in pursuit of London-based journalist Simon Ross (Paddy Considine), who publishes an article talking about “Blackbriar,” and mentioning Bourne’s name.

Naturally, the mere use of the word “Blackbriar” sets off an instantaneous reaction from CIA baddie Noah Vosen (David Strathairn), who gives the order to whack Bourne and the journo. On the way to London, though, Bourne passes through Turin and Paris. This leads to an exciting sequence in Waterloo station, as Bourne is able to save himself but not the journo.

Next stop is Madrid, to find the source of the leak to Ross, where Jason meets up with old friend CIA op Nicky Parsons (Julia Stiles) who helps him out, then becomes a damsel in distress, as Vosen puts out a hit on her, as well. At this point, CIA investigator Pam Landy (Joan Allen) is understandably upset since Vosen seems to have no problems giving kill orders with, uh, gay abandon.

The plucky pair eludes assassination, and the odyssey continues on to Tangier, following Nicky’s former boss. Now the fun really begins with a hyperactive chase sequence in the old city, concluding in a spectacular quick-cut battle between Bourne and CIA hit man Desh, played by martial artist Joey Ansah.

We finally end up in New York as Bourne discovers his roots.

No doubt, the tech work is just about flawless, and the pace will get you going, but somehow, the emotional tone of the film is pretty flat. After all, it is not exactly the holy grail when Jason gets the full story of his recruitment and training. He and the audience already know that he is a CIA assassin. Do the details really matter to us?

And besides, when it turns out that the whole business is just another (yawn) rogue security agency out of control, is that supposed to be a shock? That plot angle has only been done about 300 times in the past.

Moreover, the overall conceit of all-powerful secret agencies should have died once and for all with 9/11. Arguably, the failure to prevent those attacks was the greatest security foul-up in American history. Most agree that there was plenty of intel, but it was not acted upon. Worse, no heads rolled.

Instead, failure was rewarded—as it always it within the Government—by extracting more budget and more programs, which are doomed to be just as impotent as their predecessors.

The reason for this is the flaw inherent in the system, whereby the main problem with government is politics. As long as representatives want to keep getting reelected, they will tell the public what they think it wants to hear, and the answer is always more money. Indeed, the only difference between a liberal and a present day “conservative” is what we spend the “more money” on.

« MICHAEL VICK, RON MEXICO, AND THE NFL GOING TO THE DOGS
CAN WE EVER GET BETTER POLITICIANS? »