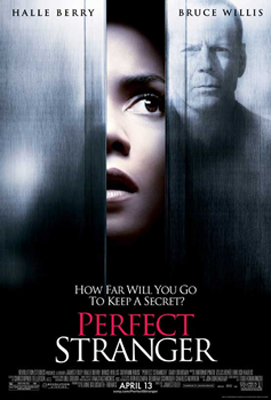 What could have been a good story is hampered by an awful script, while the acting leaves much to be desired. Three endings were filmed, and if the one they chose was the best, then it seems that any hack writer can get his script produced in today’s Hollywood. Plot holes abound, along with virtually nonstop product placement.

But, the main problem is that you can’t make a good movie without any sympathetic characters.

Pic opens with hotshot investigative reporter Rowena Price (Halle Berry) confronting a US Senator, who has been fooling around with some male senate pages. Of course, the guy is a “family values” type, who is actually a closet homosexual. It sure doesn’t take the film long to strike a PC chord, conveniently forgetting that Republican congressman Mark Foley, caught up in a page scandal DID resign, while nothing much happened to tainted Dems Barney Frank, Gerry Studds, and Mel Reynolds.

Ro thinks she has a big-time story, but it gets spiked, and she quits in a huff. I guess every other story she ever submitted got published. She gets some solace from co-worker Miles Haley (Giovanni Ribisi), a computer genius who is the brains behind her successes. Miles would also like to get physical with her, but it clearly won’t happen. The next best thing must be hanging around.

On her way home, she is approached by sleazy Grace (Nicki Aycox), who wants her to do an exposé on advertising exec Harrison Hill (Bruce Willis). After all, they had a brief affair, and then he dumped her. Imagine that! Grace says she has the goods on him, and since all his money is really in his wife’s name, she could ruin him. She also gives Ro incriminating e-mails and chat room records.

Not surprisingly, Ro has little interest, until Grace turns up dead. Although there is no evidence to implicate him, she suspects Hill. Even puppy dog friend Miles doesn’t think there’s much there, but agrees to help her.

Using computer skills that can only be termed supernatural, Miles gets her hired as a temp in Hill’s agency. Within minutes, she is cyber chatting with Harrison, who is able to keep important clients, but seems to do little but go to restaurants, run around on his wife, and cyber chat late into the night. All this while his wife is supposedly watching him closely.

Numerous red herrings are thrown into the mix, along with a “surprise” ending that blows off a good deal of the first act, and in identifying the real perp stretches credibility to the breaking point.

For what is being sold as a sexy crime thriller, there is no sex, no violence, and precious few thrills. Way too much time is taken up with images of computer screens and titillating shots of Ms. Berry, that never deliver. The R rating is for language, and the “adult situations.”

Willis can get away with phoning in his perf, since he is supposed to be cool and detached. Berry, though, is awful, and if all the producers wanted was eye candy that can’t act, they could have gotten much better looking women for far less money, I’m sure. Why Berry keeps picking roles for which she is so unsuited is the real mystery here. I’m guessing that she truly does like the camera’s attention on her bod, because that’s heavily featured here (fully clothed).

The trailer for this film is far more misleading than most, and for what they must have spent on it and the ad budget, they should have left some over for a script doctor.

Absent that, they could have previewed it to anyone over 17, who could have pointed out absurdities such as Hill not questioning why a mere office temp would live in a fashionable Manhattan apartment; that reporters would never pull the ridiculous stunt with the senator that begins the flick; that computer systems cannot be hacked as easily as it is done here; that a big exec would probably not physically assault an employee in full view of the rest of his staff; and that if implied blackmail is a reason for homicide, at least develop that plot thread.

Finally, you’d think there would be enough in the budget to get Willis a decent hairpiece, but you’d be wrong.

« A QUESTION OF FAITH
BLACK MONDAY IN BLACKSBURG »