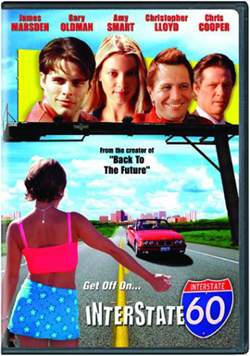 Chances are you missed this one, written and directed by Bob (Back to the Future) Gale. I sure did. After all, it had—at best—a limited theatrical release, even it if did play the festival scene for some time. Which just goes to show you that even a Hollywood vet, with big successes and strong contacts, isn’t guaranteed distribution. No doubt, the path to a theatrical release was not aided with tone deaf reviews from both Variety and The Hollywood Reporter—usually quite reliable.

Of course, it probably didn’t help that this pic is a sweet, quirky fantasy/dramedy with very little hard action and no sex, although there is some strong language.

The film centers on Neal Oliver (James Marsden), a recent college graduate who is being pushed into the legal profession by his attorney father. Neal, though, is not really interested in the law. In fact, the hobby of painting he took up as an undergrad seems closer to what he would like to do. Confused, and mostly not happy, he is looking for a bit of understanding. Unfortunately, this is not forthcoming from anyone other than his sister. His girl friend is not helpful (she doesn’t want to be judgmental), and he admits that his dad probably likes her better than he does.

Still, it’s his birthday, and the present from his parents is a brand new red Beemer, which is exactly the car his FATHER would have liked to receive at Neal’s age. As he blows out the candles on his cake, after the birthday dinner, he makes a wish for understanding. This wish is overheard by a waiter, who is actually O.W. Grant (Gary Oldman) a magical character who will grant you one wish (get it?).

Soon after, Neal is struck in the head by a falling pail, and ends up in the hospital. His reflexes are tested by a whimsical employee Ray (Christopher Lloyd), who later recruits him to deliver a package to the town of Danver (yes, Danver), located along Interstate 60.

Not having anything better to do, and thinking that he may find some answers on the road, Neal prepares to set off on the journey, realizing that he may have trouble finding Danver, since Interstate 60 does not exist. As it turns out, a billboard featuring the blond mystery girl (Amy Smart) whose image has appeared in his paintings, marks the way to Interstate 60.

The film then turns into a bona fide road flick, replete with odd characters, including a guy with a bottomless pit stomach (Wayne Robson), a moralist who can terrify you (Chris Cooper), a town built around drug abuse, a town inhabited only by lawyers, and a randy woman (Amy Jo Johnson) searching for the perfect, uh, sexual experience.

Mr. O.W. Grant drifts in and out of the proceedings, and there is a riff on the old 8-ball decision maker, popular in the 1960’s, to liven things up.

Gale handles the transitions between fantasy and reality quite well, and the story does provide a few unanticipated twists. I especially liked the clever meet cute between Neal and the blond dream girl.

You’ll get a kick out of this movie—if you can find it.

« FINDING THE LEADERS
GLOBAL WARMING: LOOKING UNDER THE HOOD »