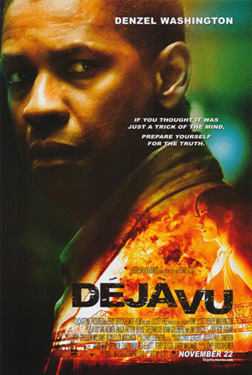 Mind-bending time travel considerations set against a backdrop of domestic terrorism, within a rebuilding New Orleans, adds up to 128 minutes of enjoyable screen time, in this Thanksgiving weekend police procedural.

Pic opens with hundreds of people, including Navy personnel, boarding the Alvin Stumpf ferry. Within a few minutes, though, there is a large explosion, resulting in more than 500 deaths. ATF agent Doug Carlin (Denzel Washington) arrives on the scene, and in fairly short order determines how the tragedy occurred, but also discovers the body of a young woman in the water, who died of burn/blast injuries, but is found at a place and time that would indicate she died before the ferry incident.

Carlin’s good works are noticed by the FBI special agent in charge Jack McCready (Bruce Greenwood) and his sidekick Agent Pryzwarra (Val Kilmer), who bring him into an amazing high-tech installation called Snow White that allows one to look back 4 days and 6 hours into time. This sounds great until they tell him that there are no replays, so it is vital to know where to look in the first place, and that’s why they brought him in.

Since evidence is mounting that the aforementioned woman may be a link to the case, Carlin decides to follow her actions in the time leading up to the disaster. The woman is soon identified as Claire Kuchever (Paula Patton), and Doug and the nerds (including Adam Goldberg, who has been typecast) derive some enjoyment in watching the actions of Claire—especially as she takes a shower. Yup, the time bending device can see through walls.

By retracing Claire’s steps, they locate the perp Carroll Oerstadt (Jim Caviezel), a disaffected Timothy McVeigh wannabee, and bring him in. As a few critics have noted, this sort of thing has Al Qaeda written all over it, but here, the filmmakers opted for the PC route.

Carlin is able to figure out that the video time machine has a portal, and even though they have failed in attempts to send animals back four days, his growing affection for Claire—à la Dana Andrews in Laura (1944)—convinces him that he must travel back in time to prevent the terrorist act, and save Claire in the process. He would also like to prevent the death of his partner Larry Minuti (Matt Craven), killed by Oerstadt.

The most innovative sequence involves an odd car chase with Carlin wearing a helmet that lets him see into the past. Thus, he is chasing past images of the perp, to locate his hideout. As you might imagine, it is rather distracting to drive in real time, while watching a video of the past.

As with any story involving time travel, there are plot holes, but helmer Tony Scott’s mostly fast pacing allows for scant opportunity to dwell on such matters, at least during the viewing. I have the suspicion that substantive material was cut from the movie, that would have fleshed things out a bit more, but at over two hours, the film was probably long enough.

The perfs by Washington, Caviezel, and Patton are strong, with the rest of the cast being given little to do.

Catch this one for the sheer fun, and, as they used to say on Mystery Science 3000, don’t worry too much about the science.