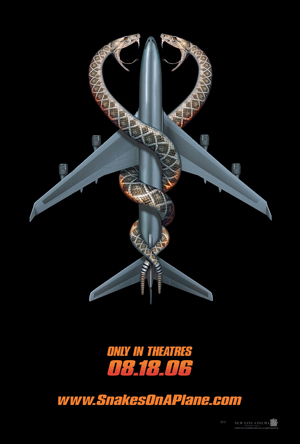 Pic begins with shots that recall the TV Series Hawaii Five-O (1968-1980), and then center on surfer dude Sean Jones (Nathan Phillips), tooling up the road on his motorcycle. He stops in front of a house in the country only to witness mobster Eddie Kim (Byron Lawson) literally whack a luckless prosecutor. Unseen by the baddies until he hightails it out of there, Sean is now a very marked man.

In fact, he’s marked enough to be targeted for a hit the moment he returns home. Fortunately, this hit is foiled by tough guy FBI Special Agent Neville Flynn (Samuel L. Jackson), who convinces Sean that he must travel to Los Angeles to testify against Kim.

Despite Neville’s best efforts to decoy their flight, Kim arranges to load hundreds of poisonous snakes on board, and these serpents are all hopped up on pheromones, making them even more vicious, and possibly more photogenic. The snakes are set to be released from their confines via some sort of electronic gizmo only when the aircraft is well over the blue Pacific, and beyond the point of no return.

So, at around 30 minutes in (to the movie, not the flight), the snakes emerge and it doesn’t take too long for the passengers to get hiss-terical. Combining the rules of disaster and horror flicks, we can almost predict who will get nailed. Certainly, there is no shortage of cliché characters, but that is all part of the fun, isn’t it?

Writers John Heffernan, Sebastian Gutierrez, and David Dalessandro come up with all sorts of nasty places to get snakebit. Suffice to say that audience members of both sexes will cringe.

Interesting plot elements include how they actually do get the snakes off the plane, and how a video game addict saves the day. Beyond that, what started out as a silly idea several years ago, and got hyped on the Internet, is now an entertaining summer release.

Most of the critical reaction is positive, save the usual naysayers, who cop a frankly ridiculous “But, it’s marketing, not feeelm” attitude. I for one have had it with this “art versus commercial” debate that has gone on forever. Let’s see what Leo Tolstoy had to say about art…

Art is not, as the metaphysicians say, the manifestation of some mysterious idea of beauty or God; it is not, as the aesthetical physiologists say, a game in which man lets off his excess of stored-up energy; it is not the expression of man’s emotions by external signs; it is not the production of pleasing objects; and, above all, it is not pleasure; but it is a means of union among men, joining them together in the same feelings, and indispensable for the life and progress toward well-being of individuals and of humanity.

Conspicuously absent in all this is a condemnation of commerciality. Moreover, Tolstoy held that most celebrated works of “high art” are nothing more than clever imitations of existing art. He called these “counterfeit” works, and felt that they are not really art, at all. There were some surprising selections included in these counterfeits, by the way. Finally, he divided true art into good and bad, depending on the moral sensibility with which a given work infects its audience.

Let’s examine moral sensibility in Snakes for a moment.

Sean does the stand-up thing and agrees to testify, being protected by Flynn. Several of the passengers are heroic, and some even undergo a good character arc. The bad guys, including the snakes, get their just deserts.

Of course, there are dozens of plot holes, and there is no reason to detail them here. But where life does come close to imitating art in this case—and this is on the mind of any air traveler—is that the worst snakes on a plane are now of the human variety.