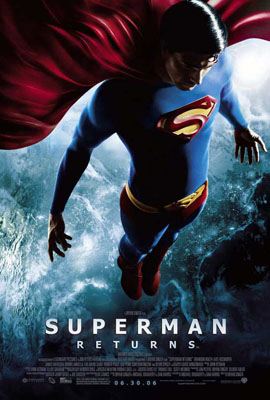 Top-notch special effects lead the way in this entertaining blockbuster, but a weak script and lackluster perfs spoil the experience, while the many references to Jesus are heartwarming.

The modern Superman feature era started in 1978, only to be unceremoniously shut down after the crummy Superman IV: The Quest for Peace (1987). There would be many false starts toward a Superman in the 21st century, before this project was launched.

Pic opens with Clark Kent/Superman (Brandon Routh) returning after five years to his parents’ farm. His foster mother Martha (Eva Marie Saint—looking great for 81) has some nice moments with her son, who reflects on his early life before making his way back to Metropolis.

Fortunately for Clark, his old job is still there at the Daily Planet, even if Lois Lane (Kate Bosworth) is now living with the boss’ nephew Richard White (James Marsden). What’s more, Lois is sporting an out-of-wedlock 5-year-old son, of questionable paternity. And, if all this were not bad enough, during our hero’s absence, Lois has won a Pulitzer Prize for the editorial “Why the world doesn’t need Superman.” Sheesh!

But, Superman proves his mettle in a hurry, rescuing a NASA press flight that includes the launching of the Space Shuttle. With Lois aboard the ill-fated airliner, the two of them have a sort of meet-again cute, but the sparks are only flying from Superman’s side.

Meanwhile, arch-villain Lex Luthor (Kevin Spacey) is planning another EEE-VILLLE crime, that is possible because he was able to break into the Man of Steel’s Arctic Fortress and steal some cool futuristic technology. Of course, the crime itself is absurd, even though it boasts the highest of high-tech (not to mention FX). Along for the ride is moll Kitty Kowalski (Parker Posey).

It is up to Superman to foil Luthor’s plot, and in doing so he will come up against Kryptonite (again).

Many critics have observed that the perfs are flat, and I would have to agree. Then again, if a modern blockbuster is supposed to be a series of special effects linked together by a few minutes of practical action, how important is the acting? Although the movie logs in at a bulky 2 hours and 34 minutes, it certainly holds your attention, yet it would surely have benefited from a better story.

The critics are nearly unanimous in condemning the choice of Kate Bosworth as Lois Lane. They note that she looks (at best) her real age of 23, and that this would hardly give her enough years to garner big time journalistic cred, if not the son. Fair enough. I would add that despite her being named #38 on the Maxim magazine Hot 100 of 2005 list, #60 in FHM’s “100 Sexiest Women in the World 2005” special supplement, and #8 in Maxim’s Hot 100 of 2006, in this film she has ZERO sex appeal.

You’ve got to figure, though, that in a $250 million plus project, there must be a good reason for all casting decisions. And there is. If she had sex appeal and a personality (à la Margot Kidder in the earlier pics), it would not be so easy for the script to simply blow off the supposedly hot former relationship between Superman and Lois, would it? Those more cynically inclined would note that she looks about 15 in the movie, and this might appeal to the large teenage boy audience contingent.

The single mom aspect of Lois is a bit off-putting, especially since nothing whatever is done to develop the character of the son. Interestingly, even though Lois and Richard White are not married, the boy’s name is Jason White. Talk about an open adoption! Do the math on the Lois character, and it is not a pretty picture:

She doesn’t know who the father is, which suggests a little promiscuity. She doesn’t object to Richard adopting him, even though she doesn’t want to marry Richard, which would suggest gold-digging. Notwithstanding, she still pines away for Superman, and could see getting back together, in a feminist uber-fantasy. (You go, girl!) But, Superman has to do the right thing, and back off. Maybe that’s why he is laced with all the Christ imagery, including the Lenten/Old Testament theme of the Suffering Servant.

Only this time, Superman might have a kid, which brings us into Da Vinci Code territory. And, with Luthor and Kitty still standing at the end, the sequel potential is enormous.