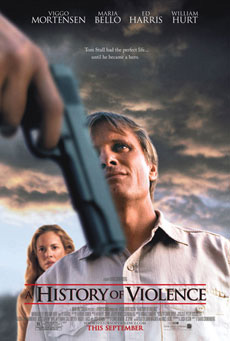 Uneven pacing, mysterious identity, and dark humor, combined with up close and personal violence make this one work for helmer David Cronenberg. If you’re a fan of gangster movies, you’ll also appreciate the send-up of many familiar plot elements.

Tom Stall (Viggo Mortensen) owns a diner in a small Indiana town, and seems to have the “perfect” life, with pretty wife Edie (Maria Bello), teenage son Jack (Ashton Holmes), and young daughter Sarah (Heidi Hayes). But, one fine day, as he is closing his restaurant, a couple of thugs walk in, with robbery and murder on their minds. Suddenly, Tom becomes a killing machine worthy of any martial arts film (if guns were allowed), and dispatches the perps.

Now a hero, he gets plenty of media coverage, which brings more business to his diner, but also attracts a hood from Philadelphia named Carl Fogarty (Ed Harris). Fogarty insists that Tom is really a former wise guy named Joey Cusack. Of course, Tom denies this, but Fogarty upon leaving the diner, asks Edie, “You should ask Tom… Why is he so good at killing people?”

Good question, and if the answer is readily apparent to the audience, it takes a while for Tom’s family to figure it out. As it happens, Jack is having some issues with a school bully, and takes a modified page from Tom’s book to deal with them. As for Tom, his problems have just begun, and the bullies after him are of the lethal variety.

Thus, the pic unfolds, examining how we react to violence, what difficulties it can solve, how it interacts with good and evil, and how it converges with sex. And, with Cronenberg, we know that the journey will come with a few surprises, and thought-provoking moments.

There will be two examples of somewhat kinky sex, with the kinkier and more violent episode being far more satisfying to the lovers. We will see the laconic lead offender in the diner caper try to get in some last words, emphasis on “try.” There will be a garroting by a big dumb wise guy, that goes down somewhat differently from what you’ve seen in the Godfather movies. And, every bad guy dies in a messy way.

To spice things up, all the crime takes place in a world where forensic science does not exist, and the flagrant behavior of the offenders makes the late John Gotti look like a wallflower. Compelling perfs by Mortensen, Bello, and Holmes drive the narrative, that, stripped to its essentials, focuses on whether or not it is possible for a man to change, and the gory details of making this change. Everyone says that they are in favor of rehabilitation, but what if the rehabilitee is too close?

Not an action flick, but not for the faint-hearted, either. Good, if not great, and in this rotten movie year of 2005, that IS saying something.