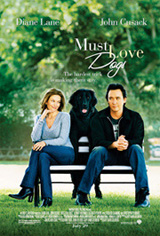 A paint-by-numbers chick flick, but the writers lost count. Featuring more clichés than you would care to endure, including not one but two understanding gays, providing shoulders for the heroine to cry on.

Sarah (Diane Lane) is a 40-something recent divorceé, who can’t seem to find the right guy. Worse, she is burdened with an ultra meddlesome family—especially older sister Carol (Elizabeth Perkins) who is having her own marital problems, but finds the time to be a constant companion. Carol posts Sarah’s name on an Internet dating site, setting up the latter’s meet cute with Jake (John Cusack).

As you might expect, their road to togetherness is bumpy, one of the bumps being Bobby (Dermot Mulroney), the father of one of Sarah’s preschool students. In the meantime, her father Bill (Christopher Plummer) is sowing his own wild oats in the wake of his widowhood. One of his lady friends is Dolly (Stockard Channing). I hope that Channing, in horrific makeup, is not now being relegated to quirky old lady roles. Strip away Channing’s age makeup, and put her up against the 21 years younger Lane, and tell me who looks better. (Diane would be advised to put a wee bit of fat back into her diet).

There are no surprises in the plot, but boy, are there problems with helmer Gary David Goldberg’s screenplay. Goldberg is better known for TV fare, and in that genre one can probably get away with dialog that is nothing more than sitcom boilerplate, stereotypes, and impossible economics. For example, in TV Land, it’s OK that the friends of Friends could not in any manner afford their NYC apartments, with the jobs they had. TV viewers come for the cheap, quick laughs, dumb situations, and shtick, and can tolerate it for a 30-minute show. A 98-minute feature is a whole different story.

Jake is a boat builder who doesn’t sell any boats; Sarah’s house seems way too nice for a preschool teacher, unless she had a killer divorce settlement; and Bobby lives in a trailer park, but drives a late model Volvo. Jake is sensitive because Doctor Zhivago (1965) is his favorite movie, and he eats at ethnic restaurants. In real life, you’d have a difficult time finding a 40-something guy who could sit through all 3 hours and 17 minutes of that film, let alone discovering one who pegs it as his favorite.

Sarah is cautious about involvement, but manages to have sex with Bobby, as he explains away the presence of her hot instructional assistant at his home, with an excuse that even her students would not believe.

On the other hand, Jake must REALLY be a great guy, since he turns down—twice—easy sex with cute-as-a-button (and about as dumb as one, also) Sherry (Jordana Spiro). And, what’s up with this notion that the only thing Sarah’s sisters have to do is hang out with her? The nadir of all this family time is an appalling sequence in which the girls sing the theme from TV’s Partridge Family. Goldberg may not have wanted to stray too far from his roots, but this scene is devastating to watch, and adds nothing whatsoever to the story.

They say women like the sort of drivel that is “Must Love Dogs,” but you have to wonder. The only believable character is the promiscuous Sherry. Everyone else, including the way too empathetic “deli guy” (Kirk Trutner), and the precocious preschoolers is an uber-phony stick figure. Few, if any, of the situations could actually occur in real life, and the women come across as being superficial, and pretty stupid.

Finally, too many questions linger after the closing credits. Will Jake finally sell a boat? How will Sarah face Bobby and his son for the rest of the school year, following their tawdry sex? Will Bill settle down with Dolly? What will Sarah’s sisters do now that they don’t have to concentrate on getting her a match? And, who gets to go out with Sherry?

« WHAT IS THE LAW?
BLINDED BY BREATHTAKING ARROGANCE »